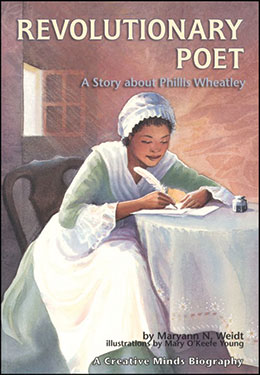 In this engaging biography, author Maryann Weidt tells the story of how a young slave girl in revolutionary Boston became an internationally famous poet and the first black American to publish a book.

Taken from her family in Africa at the age of seven, Phillis Wheatley arrived in Boston as a slave in 1761. After she was purchased by the Wheatley family, Phillis quickly learned to speak and read English. The bright young girl soon began writing poetry. By 1771, her poems had been published in newspapers all over the colonies, and critics were praising the “extraordinary negro poetess.”

In this book, my editor had to rein me in to keep me from going on and on about the American Revolution. She would say, “We’re losing sight of Phillis here. Remember, it’s Phillis’s story.” When I was doing the research, I loved reading about the American Revolution. What an amazing time in the history of our country. People really cared about something. I think I’ll have to do another book set in that time period. I can’t wait to read more about it.